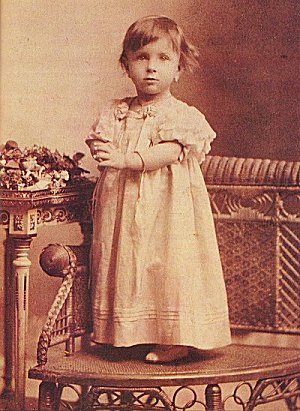 The one who would be called later Teresa de Los Andes was born in Santiago, Chile, on July 13, 1900. Fifth child of don Miguel Fernández Jaraquemada and doña Lucía Solar Armstrong, she received at baptism the name of Juanita.

Juanita's family was wealthy. Her paternal grandfather was native from Spain. Her motherly grandfather, don Eulogio, had a very large estate in Chacabuco, about forty miles north of Santiago, where he used to gather often his family.

During vacations Juanita goes often to Chacabuco which she likes very much. Very early she learned to ride a horse. As a genuine horsewoman she would ride through the estate up to the beginning of the Andes cordillera.

Juanita's brothers and sisters were: Lucita, Miguel, Luis (Lucho), Juana (who died a few hours after birth and whose name was given to Juanita), Rebeca and Ignacio. Juanita was particularly close to her brother Lucho and to her inseparable sister Rebeca.

Very early Juanita felt attracted toward God. She liked to go to church with Ofelia (the servant girl who used to take care of her). One day, being in Chacabuco, she took the hand of a priest friend of the family and told him: "Father, let us go to heaven!" When they were out of the house the priest asked her: "Now, Juanita, where is the way leading to heaven?" Juanita answered: "This way", pointing toward the Andes cordillera. The priest told her: "After climbing the high mountains heaven shall still be far, very far. No, Juanita, this is not the way leading to heaven. Jesus in the tabernacle is the royal way to reach there."

Now Juanita did not have an easy character. She was conceited, did not like to obey, would easily become angry (her brothers enjoyed let her become angry) and cry for nothing. With the help of God's grace, especially through the Eucharist, Juanita shall progressively learn to overcome her defects and control herself.

In 1906 an earthquake shook the city of Santiago. In her Diary Juanita wrote that it was at this time that Jesus began to take possession of her heart.

Juanita's grand father died a holy death in 1907. Juanita's mother, doña Lucía, inherited a part of the Chacabuco estate which was managed by Don Miguel, Juanita's father. The same year Juanita entered Sacred Heart school in Santiago, a school run by the Sisters of Sacred Heart of St. Madeleine-Sophie Barat.

It was Lucho who taught Juanita how to pray the rosary. Both made the promise to pray it every day, a promise Juanita kept until her death (only one time, she writes, being very small, she forgot). "From that time on, one can say that Our Lord took me by hand with the most holy Virgin."

Quickly Juanita felt a great desire to do her first communion. She would often ask when she would be able to do it but would be told that she was too young. Then she would ask to be taught to do communions of desire. After insisting a lot Juanita was admitted to first communion. She wanted to prepare herself through confession and prayer, offering many little sacrifices to Jesus. "I prepared myself for one year. During that time the Virgin helped me to purify my heart from all imperfections." She did her first communion on September 11, 1910, in Santiago. In her Diary she wrote about this event which impressed her for life. She would try as much as possible to receive communion every day.