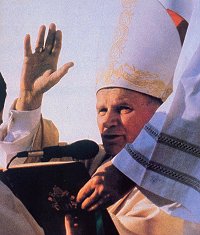 In the account of the cure of the blind man, the Gospel of the Fourth Sunday of Lent shows the none too easy way which leads to the discovery of this Light: to the discovery of Christ. In how many different ways the event narrated by the evangelist John is renewed in the life of human beings of every era!

Today the Church wants to speak the words of St Paul with particular reference to two of her daughters who have become "light in the Lord": Marie of St. Ignatius (Claudine Thévenet) and Teresa "de los Andes" (Juana Fernández Solar). These "children of light" distinguished themselves as Christ's witnesses in the world. In the "old" world of Europe, Thévenet, and in the "new world" Fernández Solar. As we are still celebrating the 500th anniversary of the evangelization of the great American continent, we pick a beautiful blossom which the Good News and the grace of Baptism raised among the populations of the "new land"…

5. Sister Teresa "de los Andes", Teresa of Jesus, is the light of Christ for the whole Chilean Church; this Discalced Carmelite, the first fruit of holiness of the Teresian Carmel of Latin America, today is enrolled among the saints of the universal Church.

Similar to the first reading which we heard from the Book of Samuel, Teresa does not stand out because of her "appearance or lofty stature". "Not as man sees", the sacred text tells us, "does God see, because man sees the appearance but the Lord looks into the heart" (1 Sm 16:7). Therefore, in her short life of little more than 19 years, in her 11 months as a Carmelite, God made shine forth in her in an admirable way the light of his son Jesus Christ, so that she could be a beacon and guide to a world which seems to be blind to the splendour of the divine.

In a secularized society which turns its back on God, this Chilean Carmelite whom to my great joy I present as a model of the perennial youth of the Gospel, gives the shining witness of a life which proclaims to the men and women of our day that it is in loving, adoring and serving God that the human creature finds greatness and joy, freedom and fulfillment. The life of Blessed Teresa cries out continually from within her cloister: "God alone suffices!"

In her tender love for Christ Teresa finds the essence of the Christian message: love, suffer, pray, serve. In the bosom of her family she learned to love God above all things. In feeling that she belonged to the Creator alone, her love of neighbour became more intense and definitive. She stated as much in one of her letters: "When I love, it is for always. A Carmelite never forgets. From her small cell she accompanies souls wherever they are in the world" (Letter of August 1919).

6. Her burning love led Teresa to desire to suffer with Jesus and as he did; "To suffer and love, like the lamb of God who took upon himself the sins of the world", she tells us. She wants to be a spotless victim offered in continual, silent sacrifice for sinners. "We are coredeemers of the world", she says a little later, "and the redemption of souls is not obtained without the cross" (Letter of September 1919).

The young Chilean saint was eminently a contemplative soul. For long periods of time before the tabernacle and the cross in her cell, she prays and adores, pleads and expiates for the redemption of the world, with the power of the Spirit animating the apostolate of missionaries and, in a special way, of priests. "A Carmelite", she tells us, "is a sister of the priest" (Letter of 1919).

However, being a contemplative like Mary of Bethany did not excuse Teresa from serving as Martha did. In a world which relentlessly seeks to excel, possess and dominate, she teaches us that happiness is found in being the least and the servant of all, following the example of Jesus who came not to be served but to serve and to give his life in ransom of the many (cf. Mk 10:45).

Now in eternity, St Teresa of Los Andes continues to intercede as an advocate for an endless number of brothers and sisters. What she found in her heaven on earth as a spouse of Jesus, she now contemplates without veil or shadow, and from her immediate closeness intercedes for those who seek the light of Christ...

This is the Lenten message of today's canonization: Christ is the light of the world! Whoever follows him "will have the light of life".