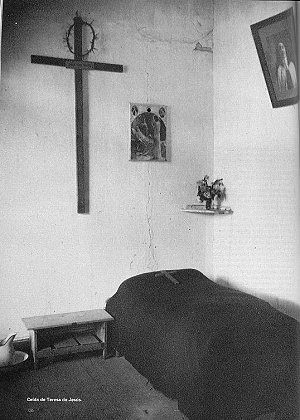 • January 11 : accompanied by her mother, Juanita visits the carmel of Los Andes. Her doubts vanish and she receives confirmation of her Carmelite vocation.

• March 25 : Juanita writes to her father to ask for permission to enter the Carmel.

• Avril : Juanita prepares her entrance into the carmel. While beeing joyful to realize her vocation, she suffers very deeply because she is going to leave her family which she loves so much and which, she says, she would never have left for a man.

• May 7 : Juanita enters the carmel of Los Andes and receives the name of Teresa de Jesús (Sister Teresa of Jesus). Despite the suffering due to the separation from her family, peace and joy flood her soul.

• Teresa follows the Rule of the Carmel with humility and love. She offers herself to do the humblest and most disagreable works.

• Written from the carmel of Los Andes, Teresa's letters radiate hapiness and shall draw many of her friends to enter religious life.

• October 14 : Teresa receives the habit of Carmel and begins her noviciate.

• Teresa, has a strong spiritual bond with her prioress but suffers from misunderstanding and persecutions from the pedagogue sister (who helps the prioress in the direction of the novices).

• Various spiritual trials : tentations from the devil, dryness in silent prayer. Teresa goes on in her total gift of herself to Christ in great faithfulness to the Carmelite Rule.

• At the beginning of March, Teresa assures Father Avertano, the Community confessor, that she shall die within a month. She asks for permission to do extraordinary penances. The confessor does not believe her and answers her that every Carmelite must be ready to die at every moment; let she only keep the Rule.

• Avril 1 : Holy Thursday. Teresa begins her way of the cross following Christ. She spends almost the entire day in the chapel.

• April 2 : Goos Friday. She participates in the liturgy. The novice mistress sees her with a strong fever and asks her to go to bed.

• April 5 : she asks for confession and communion. She suffers terrible tentations of despair. The devil tries to convince her that God has rejected her because of her unfaithfulness.

• April 6 : arrival at the carmel of Los Andes of doña Lucía, Teresa's mother. She brings with her a written permission of the Apostolic Nuncio to have Teresa leave the enclosure to go to a good hospital in Santiago. The prioress answers that Teresa would not accept this : if she would die out of the enclosure, she would be considered as having left the Order, which would be unbearable for her. Doña Lucía understands that the Lord asks her to offer him her daughter.

• April 7 : Teresa does her religious profession in articulo mortis. The physicians' diagnosis is an advanced typhus . Teresa receives communion for the last time.

• April 14 : Burial of Teresa. Surprisingly, the convent chapel is flooded by people from Los Andes; they say they come to see the little saint who just died of love, while they did not know Teresa when she was alive. Thus the reputation of holiness of Teresa is immediate.

• November 23 : Rebeca, sister of Teresa, enters the carmel de Los Andes. She had understood that the Lord was inviting her to substitute her sister. She receives the name of Teresa del Divino Corazón (Teresa of the Divine Heart). She shall die on December 31, 1942, with a reputation of holiness.

• March 20 : beginning of the Diocesan process in view of Teresa's beatification. This process shall last until 1971 and shall be followed, according to the Holy See's request, to a complement of information.

• April 3 : Pope John Paul II beatifies Teresa de Los Andes in Santiago during his apostolic trip to Chile. Teresa is the first Chilean raised to the honors of the altars.

• Building in Auco (near Los Andes) of a shrine to receive the tomb of Teresa. New buidings for the Carmelite monastery are also built near the shrine.